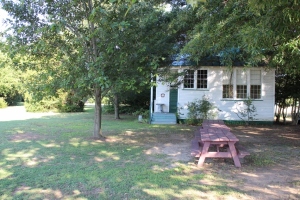 Old Port Royal School, Inc. is a non-profit organization formed in 1992 to preserve the school house and its history. The building has been renovated and currently houses a museum where school children, and adults alike, may experience living history lessons. Our teacher-in-residence will take you back to a time when students of all ages were taught in a one room school.

The school is supported by individual memberships, public and private donations, and corporate sponsorships from Union Bank and Trust, Inc., Port Royal Ruritan Club, Historic Port Royal, Inc., and the Caroline Historical Society. We are, as always, thankful of all our sponsorships, donations and gifts, however, maintenance and public availability depend on additional contributions and donations as well. (all tax deductible).

On June 20, 1923, a two acre plot of land was sold to the trustees of the Port Royal Colored School League by the C. Marshall Gravatt family. The League purchased the land to build a school for the town’s African-American children. Prior to the construction of the school, children had been taught on the second floor of the old St. Luke Hall. The Hall burned in 1921, and students were left without a school until the new building was constructed in 1924. The League trustees were residents of Port Royal and members of Shiloh Baptist Church. Trustees and signers of the deed were James Brooks, Thomas Rich, Howel Jeter, J.H. Pratt, W. L. Pruce and L. W. Hill.

The Old Port Royal School was one of twenty-two one-room schools for African-American children in Caroline County. The building was operated and maintained by the Colored League with financial assistance from the Julius Rosenwald Fund. Later, the school became part of the Caroline County Public School System and was used for African-American children until it was closed in 1959, when the children were then bused to a modern school in Bowling Green.

Mrs. Hortense Brown Rich was the sole teacher of the one room school from the date of its construction until it closed in 1959. She taught all subjects for first through seventh grades.